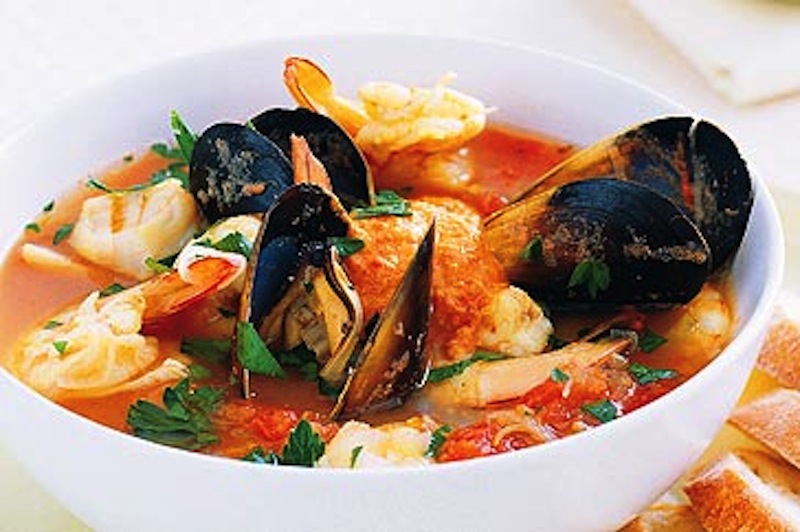 In the old port area of Viareggio on the Tuscan coast a couple of years ago my wife and I tucked into a hearty, flavoursome cacciucco, a soup traditionally prepared from the fisherman’s left-overs. It was utterly delicious and cost about £14.
At our eaterie in the old port of Marseille – admittedly a grander establishment but with rather irritating staff and slow service – we paid almost four times as much for the regional speciality bouillabaisse. Yes, it was tasty, but we’re not talking Michelin-star creativity here. And with the cheapest wine costing £44 I couldn’t afford a second bottle to ease the financial anguish.
I found a sympathetic ear from Peter Lavin, who owns The Castle Hotel in Conwy. “I know the feeling about French pricing having just come back from a trip to Paris,” he tells me.
His highly regarded restaurant, which holds two AA rosettes, features bouillabaisse and chowder on the menu. The restaurant specialises in ‘rustic’ fish dishes and both have proved very popular.
“Traditionally bouillabaisse is a simple stew using whatever fish is plentiful,” says Peter. It would have at least five varieties, plus shellfish, and varies by region in France – but with Marseille apparently having the best.”
The Castle generally uses firm-flashed fish such as halibut and haddock, along with salmon, mullet, large prawns and shellfish such as mussels or cockles. “The more the better!” informs Peter. “We don’t really have a formal recipe for bouillabaisse as it will vary in cooking times depending on the fish used, but some of our regular American visitors recently asked how we made ours.”
So, for those who would rather not pay through the nose for Marseille’s speciality, here’s how The Castle prepares its version of bouillabaisse. Served with saffron aioli and garlic crostini, the restaurant charges a more modest £15.95.
Ingredients for the sauce for about eight portions and method (cooking times will vary according to the fish used):
1 celery stick
2 large onions
6 large carrots
6 garlic cloves
1 whole chilli
4 bay leaves
1 fennel bulb
‘Sweat’ off all the above in some olive oil and add:
2 tins chopped tomatoes
Tomato puree to taste
1.5 pints fish stock
Half-teaspoon saffron
Seasoning
Reduce by a third and add your fish until cooked as you like it.
Bon appetit!
« View all blog articles.