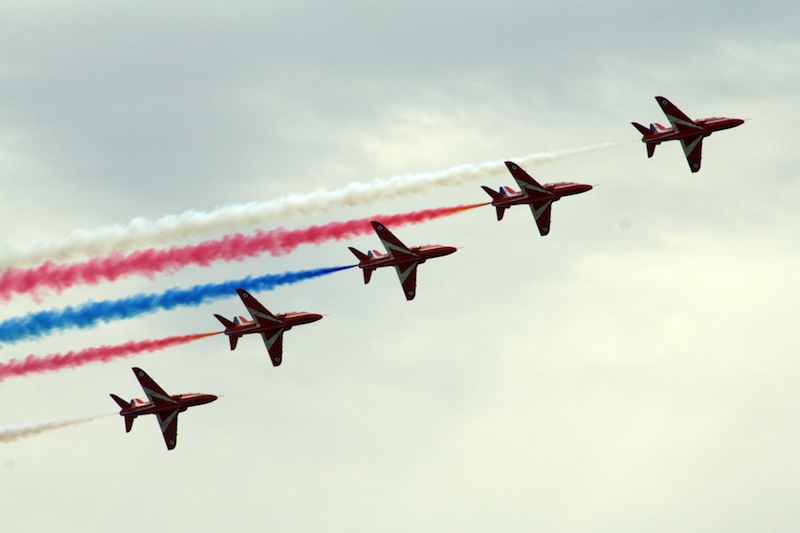 Not so long ago a kiss-me-quick hat and a quick dip in the briney were about as much excitement as you could expect at the British seaside. These days families are more likely to be thrilled by a screeching Typhoon fighter, wartime Spitfire or the RAF’s display team being put through their paces.
Air shows have become a star attraction at top resorts around the country. They’re fascinating – and they’re free.
At Eastbourne’s International Airshow a couple of summers ago, I enjoyed a spectacular helicopter flight along the coast from Beachy Head before watching fantastic air acrobatics over the sea.
They’re at it again at the East Sussex resort this month (August 15-18) with seafront and ground displays by World War II and modern military aircraft and the Red Arrows.
Another of the country’s biggest events is Bournemouth’s Air Festival (August 29-September 1), where thousands will see wartime Lancaster and Sally B B-17 Flying Fortress bombers droning across the skies and swooping Spitfire and Hurricane fighters. Blink and you’ll miss a Typhoon roaring past and the Tigers parachute display team will drop in.
If you’re looking for a comfy base for the Bournemouth event – or for the Red Arrows display at Weymouth Carnival (August 21) – check out Morton’s House Hotel in Corfe Castle.
Even handier for other seaside airborne thrills on a smaller scale is Budock Vean Hotel, a short drive from Falmouth’s annual week of carnival and regatta celebrations which include a Red Arrows display. Likewise, The Culbone at Porlock is ideal for Minehead’s Summer Festival featuring a Battle of Britain fly past and aerobatics by the Arrows and Red Devils parachute team. Both events are on August 14.
Enjoy the aeronautical thrills – but don’t get a stiff neck.
« View all blog articles.

Summertime & the living is easy