Fine Individual Hotels a collection of 50 of the very best privately owned and operated luxury hotels in the UK, includes an excellent selection of atmospheric historic properties as well as a few which may just keep the guests well and truly on their toes this Halloween.

Brockencote Hall, Chaddesley Corbett, Kidderminster
Set in a an historic part of Worcester and dating back over 300 years, the ‘touch of France’ beautifully restored historic house Brockencote Hall is encouraging guests to scare themselves silly on the Worcester Ghost Walk after a fortifying lunch of fine French fare. Commencing in the early evening, guests wind their way through ancient streets calling in at St Helens Church, The Guildhall, Huntingdon Hall, St Swithun’s Church, the Cornmarket, Greyfriars, the Tudor House Museum, The Cathedral and the Commandery whilst learning about the intriguing history of the area interspersed eerie tales. With highlights including exclusive access to the hidden cells beneath beneath the Guildhall where the perfume of a long-deceased lady still hangs thickly in the air with sudden chilling drops in temperature and the ancient St Swithuns Church with its shallow burial vaults beneath ones’ feet and its many unexplained happenings. Returning the Brockencote Halll for a much needed nightcap, guests can rest in peace in anticipation of a new day and visit to a reenactment of the Armada at Harvington Hall on the Sunday.

The Brockencote Hall Halloween special starts from £112.00/person including lunch, afternoon tea and accommodation on the Saturday night and full English breakfast on Sunday and the two events.

The Feathers Hotel, Ludlow
Situated in the Medieval town of Ludlow and dating back to 1619, The Feather’s Hotel’s rich Jacobean timber façade adorned with elaborate motifs of ostrich feathers has given rise to an equally colourful collection of visitors over the centuries…including a few who have allegedly decided to stay around. With the nearby Ludlow Castle haunted by the sad ghost of Marion de la Bruyere who has been seen to plunge to her death from the Pendover Tower since the early 12th century setting the scene for a history of paranormal activity, The Feathers Hotel’s also has a few of it’s own unexplainable appearances including a Victorian gentleman who regularly wanders through the corridor with his dog and miraculously disappears to the peculiar goings-on in Room 211. For Halloween, The Feathers Hotel’s are putting on their own ‘Eerie Evening’. On 30 October, over a two course dinner, guests can learn about the history of the area and the ghostly comings and goings, partake in platform readings with a Spiritualist Medium and venture out , if they dare, on a late Ghost Hunt & Paranormal Investigation.

The ‘Eerie Evening’, including B&B in a double room starts from £99/person.

The Gibbon Bridge Hotel
Situated within the magnificent Forest of Bowland in the spectacular Ribble Valley, The Gibbon Bridge Hotel is located in the heart of a very special part of England – the Pendle Witches Trail. Steeped in history with mystical landscapes that inspired Tolkiens’ Lord of the Rings, guests can explore the ancient market towns and quiet hamlets which are thick with mysterious tales about the famous Lancashire witches who were sentenced to death nearly 400 years ago for their alleged malevolent deeds and supernatural powers. Originally taken on foot and winding through the wild beauty of the Trough of Bowland and the Ribble Valley, hotel guests can easily join ‘the trail’ in the comforting knowledge that returning to the hotel will be a pleasingly bewitching experience. With 30 spacious and superbly appointed rooms and the offer of fine dining in the conservatory with magnificent views over the award winning gardens and the Longridge Fells.

Rye Lodge Hotel, Rye
On the East Cliff overlooking the estuary and Romney Marshes in the ancient and very picturesque Cinque Port town of Rye, which is reputed to be amongst the most ‘paranormal’ towns in England, Rye Lodge Hotel makes the ideal haunt for exploring the many ghostly going-ons that have plagued its towns folk since medieval times. With cobbled streets, 16th century half-timbered houses, old inns and little shops, Rye perfectly sets the scene for mysterious sightings with Rye Lodge Hotel no exception. A former school, the hotel is frequently visited by a sad teacher who lost her fiancé in the First World War along as well as a monk who regularly crosses what used to be the monastery’s garden and is now the hotel’s carpark.

Getting in the spirit of Halloween, a double room in the Rye Lodge Hotel starts from £120/double/twin room/night. With 18 attractive bedrooms, Venetian Leisure Centre with swimming pool and spa, the hotel is within easy access to Battle Abbey, historic battlefield of 1066, Bodiam Castle, Hever Castle, Leeds Castle, Penshurst Place and the City of Canterbury. 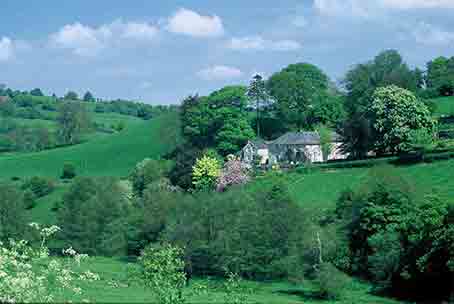 May Offer at Pen-y-Dyffryn Country Hotel